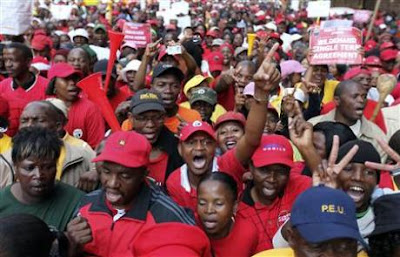 Prepare for Power!
We reprint the call of the South African WIVL to prepare for an indefinite general strike in South Africa. We have major differences with the WIVLs politics and its ultra-left objectivist perspectives, in particular its syndicalism which does not tell South African workers that a general strike is a political strike that must take state power or suffer defeat. For this reason it is not enough to talk about the need for workers power in the abstract. A call for a general strike must be accompanied by a call for the formation of national strike committees and defence committees such as the WIVL makes. But the purpose of these workers organs arising out of a general strike must be spelt out. It is to take state power and replace the capitalist regime with a workers and poor farmers government. The general strike does not take power by some objective, automatic process. Without the intervention of a revolutionary party and a program for a revolutionary seizure of power, the general strike will be defeated and the counter-revolution imposed on the masses. Preparation for a general strike must be also be the preparation for power! With this important proviso we endorse its call for the preparation for a general strike and for workers occupations.
---------------------------------------------------
The Imperialist attack on the public sector strike is an attack on the whole working class
The state does not want to move from its 7% wage offer because it is spearheading the general attack by the imperialists to lower all the wages of the workers; the wage settlement in the public sector will set a precedent for the entire working class. The imperialists, who are the ones that really control the economy (the mines, the banks, motor sector companies, the food monopolies, etc), want to lower the wages and conditions of the entire working class.  Last year, when Zuma unilaterally declared that public sector wage increase this year would be 7%, not a single SACP or Cosatu leader raised any objection; in other words, they agreed with this sentiment.
All over the world, the trade union and Stalinist leaders have led the masses into defeat: In Greece, they have had 8 general stayaways this year alone, but the KKE, the Greek Communist Party and the union leaders refuse to remove the government that has handed over the tax income from import and export and the state lottery, directly into the hands of Goldman Sachs and JP Morgan Chase; in Spain, France, Germany, the USA, Brazil, Argentina, Bolivia, etc the union leaders have allowed millions of workers to be dismissed and have allowed, despite the willingness of the masses to fight, wages and conditions of workers to be cut. We have a chance to change the pattern of defeats of the working class; already there are trends in the working class around the world, turning to open resistance, building their own fighting organizations, going over the heads of the traditional leaderships, breaking with the bourgeois parties and taking the revolutionary road.
The industrial workers in Bolivia are demanding that their union federation break from supporting the Bolivarian bourgeois government of Morales, that their union leadership be expelled and that the path be taken of class resistance against the government; the working class in Kyrgyzstan organized themselves, disarmed the police and overran the government building; the workers and small peasants of Madagascar expelled the US puppet Ravalomanana and the army came over to the side of the working class, kicking out their generals and openly claiming that they were with the masses; the metal workers of Tonghua and Linzhou occupied their factory and the main highways, stopping the planned retrenchment of 20 000 of the 25 000 workers in a privatization exercise by the Chinese government.

The ANC-SACP government is an agent of imperialism

The  ANC-SACP government has committed to spend over 4 years, R320bn, just in interest payments, to the international banks, for the electricity scam; in addition to this the international banks and their agents will gain R1 trillion (R1000 bn) from the scam electricity ‘build’ scheme. The first payment from any state revenue is handed by the ANC-SACP government, to the international banks (the imperialists); one of the main imperialist gangsters, that has bankrupted Greece through high rates of interest, JP Morgan Chase, is based within the office of Eskom to oversee the loans. Money that could and should have gone to hospitals for free and adequate health care, for free, liberatory education, for adequate housing, for a living wage for the public sector employees, is going into the coffers of the international gangsters, the imperialists. It is a lie to say that the increase of 1.6% to pay 8,6% will mean less employees, less services; the state has long been cutting down on teachers, health expenses, on housing- all they are doing is continuing the trend of being an absolute servant of imperialism, at the expense of hunger, death and starvation of the masses. The money for the increase is a tiny fraction of what imperialism gets every year; besides the Eskom scam, the imperialists, like Anglo American, Old Mutual, Liberty Life, Rembrandt, Sanlam, repatriate over R200 bn per annum to the imperialist centres; it has been the conscious policy of the state to increase the tax burden of the working class and the lower middle class and decrease the taxes of the rich, the capitalists and the upper middle class.
The world capitalist economy is in stagnation; the lack of productive growth, overall, means that the capitalists increasingly cut workers benefits and conditions, to increase their levels of profit; the imperialists increasingly turn to speculation in food, energy, housing prices, to artificially drive up prices and thereby increase profits. The ANC-SACP and Cosatu leaders are all working together with the imperialists to put the burden of the capitalist crisis onto the backs of the working class. The Cosatu leaders have failed to carry out the workers’ mandate for a general strike against the high price of electricity. The ANC-SACP leader Gwede Mantashe has promised to turn the battle into a defeat like the British miners strike of the 1980’s. The recent SACP CEC meeting of 27-29 Aug 2010 was already a meeting of the government (a significant part of cabinet) and Cosatu leaders. For the first time, 13 days into the strike, the SACP has verbally come out in ‘support’ of the strike, hardly a vanguard role.

The municipal workers are already taking solidarity action, region by region; the mine workers, chemical, energy, paper, and now the commercial and catering workers have all indicated they will come out on Thursday 2nd September, on a solidarity strike; Gauteng and Eastern Cape are poised to come out on regional strikes as well; workers have forced the Cosatu CEC to make the unprecedented call for all sectors to come out on solidarity strikes on the 2nd September; such notice will lay the basis for the start of an indefinite general strike. However, the focus of the Cosatu and SACP leaders are on negotiations with the government, with the SACP spearheading the betrayal of the strike. The SACP does not come out in support of solidarity strikes; they do not even condemn the brutality of the police against strikers; the pictures of male policemen on top of a female Nehawu striker leaves them cold; we will expose below just how the SACP plans to betray the strike.
Steps to take to ensure that there is a total shutdown on Thursday 2nd September:
Proposed demands for the general strike:

For a general strike, not a stayaway; beware of a sellout by the SACP and Cosatu leaders