FOR AN ALL-OUT STRIKE TO FIGHT UNION-BUSTING! 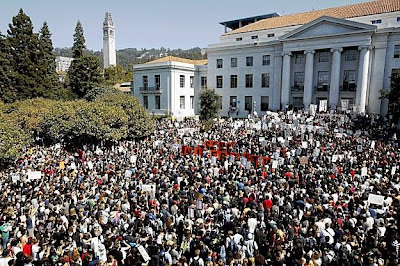 The Oakland Board of Education is determined to bust the OEA, no matter what it takes, and no matter how much it hurts our children’s education. Through its unprecedented move of abruptly shutting down negotiations and imposing its chosen terms on the teachers, the Board has not only declared war on the union, but also has shown that it is committed to destroying the quality of education for the children of Oakland. The Board is supposed to put our children first. Instead, it has revealed its true role, which is to help carry out the overall effort to cut public education and other social services to the bone.
If the Board succeeds in imposing forced concessions in Oakland , this trend will set the standard across the nation. Once the employer has imposes conditions without a signed contract the union is for all practical purposes busted, and can no longer function as a fighting union! Unless the members stand firm and fight for their contract, the OEA will become a mere shell. Like too many other unions, it will be reduced to the role of a messenger to bring the bad news to its members, with a sad face and the old sorry excuse: “Aw, shucks, that’s the best we could do; we all know times are hard.”
ACROSS THE NATION IT’S THE SAME STORY


The ruling class keeps working class parents and teachers isolated district from district, and many teachers’ union leaders have fallen into the trap, keeping their district in isolation and fighting their battles purely on the local level. We have fallen into the habit of negotiating separately, with all the districts treating education like a local issue. So when each district claims it’s broke, it appears as a local issue and the punditry and media hacks point to declining enrollment, changing demographics, bloated benefit packages, or expensive consultants to reinforce the lie that Oakland’s problems are different from Richmond’s, San Francisco’s, Detroit’s, Washington D.C.’s or Newark’s.
We know better! Our district is not the only place where public education is under attack. Budget cuts, union-busting, and privatization are widespread across the nation, fueled by the aftermath of the worldwide economic crisis. From Oakland and Richmond to New Orleans , Detroit , Chicago , and Rhode Island , public education is under attack, and the unions are being challenged for their very survival.
Local responses to this nationwide situation are popping up across the country; for example, students in New Jersey plan a statewide strike next week. But the crisis of education is not local. The root of the problem goes way deeper than that. From the puppets in the White House all the way down to the local school boards, all the legislators and other government officials are doing the bidding of those who hired them, and they know damn well it’s not the working folk. We are told to seek solutions only from district school boards, local governments, and states. But to be effective and save public education from privatization, each community’s response must be part of a national movement! This strike is not only for our own survival and to save education in Oakland , but is part of the defense of unions and the fight to stop the Democratic Party drive to privatize education across the nation.
We know damn well that if the ruling class wanted our youth educated, working class schools would be flourishing, because they would be getting the quality and quantity of support the military-industrial complex counts on every year. If Obama had any faith in the public school system, his daughters would be attending D.C.’s finest.
But Obama cannot and does not intend to salvage the education system that working class youth depend on. Just like Bush before him, he is acting as the good CEO for imperialism, and putting the needs of US corporations far ahead of the education of working class youth. Posing as a great reformer, he has offered us a new program – RACE FOR THE SLOP – under which chronically underfunded districts in economically destroyed communities try to prove their worthiness to stay alive in a “fair competition” to meet standards set without regard to the special educational needs of young people inner city, poor, and multicultural school districts. Meanwhile, class size rules are being ignored, and the quality of education diminishes, and teachers’ wages are being driven so low that talented, experienced educators are being forced out of their chosen profession.
The recent firing of an entire school staff in Rhode Island was the opening salvo in an attack on public workers the likes of which has not been seen since Obama’s mentor Ronald Reagan destroyed PATCO.
Be clear, brothers and sisters: this president is leading a war against the unions and the working class. As part of this effort, Obama and his Secretary of Education, Arne Duncan, are leading the drive to destroy public education through privatization of public universities and promotion of charter schools.
The effect of this effort is already starting to show. The UC system is no longer accessible to the average working class student. The chronically starved schools have such high dropout rates that many of our young workers will never be ready for higher education and will remain functionally illiterate. And to put the final nail in their coffin, adult education is being slashed in district after district, giving the most oppressed no way to “pull themselves up by their bootstraps.”


HOW TO WIN BACK OUR EDUCATION
But we CAN fight back! Teachers, workers, parents, and students are not powerless! Last week, in Orange County , the Capistrano Unified School District had a one-day strike over a 10% pay cut that was respected by two-thirds of the parents and students. In order to call an effective halt to the cuts in public education, however, we will need to do more than hold educational pickets prior to school, visit Sacramento to lobby the paid stooges of the ruling class, and organize day of action protests like those on March 4, Even one-day strikes will not be enough. Unless the ruling class feels the real power of labor through full-on, determined, indefinite strike actions that cut across district and state lines and unite educators, workers, students, and parents, public education will be starved into submission to the privatizing drive.
Even slowing the attacks on working people or winning a decent contract in Oakland will not be possible until workers achieve a much higher level of self-organization and political independence. The Democrats count on the Union leaders to deliver our membership into the often tried and failed political task of supporting another millionaire for the next open office; in our case our unions will push for Jerry Brown and the Democrats as the executioner of choice. To maintain their political control, the Democrats will try to put our movement back to sleep and keep union members from generalizing the fight-back across localities, and from acting politically by running working class candidates under labor’s banner. To fight back effectively, rank-and-file union members must take control back from the current leadership and forge a new, politically independent militant workers’ movement.
To win a fair contract, the OEA will have to take a number of steps: 1) escalate the strike action from one day to an extended strike until demands are met and a contract is signed; 2) break out of localism and link our struggle with that of others across the state and nation who are fighting privatization; 3) work to spark a Bay Area wide, statewide and ultimately nationwide strike for education; and 4) defeat Taft-Hartley and other reactionary anti-labor laws through action, not legislation. As long as our labor leaders accept anti-labor legislation that tells us when we can and cannot strike, labor cannot win Only when the ruling class has its back to the wall because we as workers exert our power on the picket line and in the streets as we unite and smash the anti-labor laws. This is how we will get decent wages, benefits and provide quality education for the youth.  This will also be a big step in breaking with the Democrats and building a fighting labor party.
FIRST STEP: ALL OUT ON APRIL 29!
THEN: TURN THE ONE DAY STRIKE INTO AN ONGOING STRIKE TILL WE WIN!
SMASH TAFT-HARTLEY! STRIKE ACROSS DISTRICT, COUNTY & STATE LINES!
BUILD FOR A GENERAL STRIKE BY ALL TEACHERS AND STUDENTS IN SCHOOLS AND UNIVERSITIES THROUGHOUT THE BAY AREA AND CALIFORNIA !
Humanist Workers for Revolutionary Socialism
www.HumanistsForRevolutionarySocialism.org hw4rs@yahoo.com
April 27, 2010
Posted by Dave Brown at 2:24 PM