Murder in cold blood. Is a new Intifada coming? 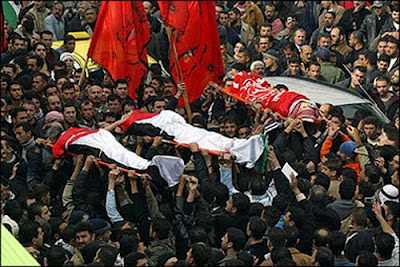 We reproduce here an article by the International Socialist League - in Israel-Occupied Palestine.


The phony "peace process" sponsored by the US is at a deadlock. The Palestinians are worried for the safety of the Mosques in Jerusalem.

Two weeks ago Jewish settlers set a mosque on fire and the Israeli state in spite of its statement that it will do everything to find and punish the criminals did not arrest any one.

Israel has rejected U.S. calls to freeze Jewish settlements on occupied West Bank land where the imperialists have promised a statehood. Benyamin Netanyahu declared a temporary freeze on new constructions in the settlements that does not include Jerusalem but the settlers not only are building new buildings but the Israel government has promised to provide them more money as compensation for the partial temporary "freeze" . Money they will use of course for new buildings. Last week Israel's announced it plans to build 900 new homes in the settlements . Abu Mazen -- fearing the masses , in particular after he supported the Israeli objection to Goldstone's report that angered the Palestinian masses in all Palestine, including in Israel that all of it is stolen land, has refused to yield on this core demand and revive the negotiations.

Last Thursday a settler was shot dead in a guerilla attack. The settlers are armed militia terrorizing the Palestinians. In response the Israeli government sent the army and this force murdered three Palestinians in Nablus , two of them clearly in cold blood plus three young Palestinians in Gaza near the fence that has turned Gaza to a ghetto. A Hamas security source said the three shot in Gaza were apparently civilians collecting scrap metal in an industrial zone near the Israeli border to rebuild their homes destroyed by Israel last year.

In Nablus over 10,000 Palestinians attended the funeral of the three persons who were murdered by Israel. One of the murdered Palestinians has been identified as Anan Subeh, 33, of the Al-Aqsa Martyrs Brigades. The other two Palestinians are Raed a-Sarkaji, 38, and Raghsan Abu Sharah, whose brother was regarded as a top commander with the organization.

During the killing , a-Sarkaji's wife who tried to save his life was shot and wounded and was later transferred to hospital for medical care.

Palestinian security sources report the Israeli troops surrounded the Nablus casbah at around 4:00 A.M. on Saturday. Then, the IDF surrounded one of the homes in the area before proceeding to forcibly enter. The Palestinians had refused Israeli soldiers' calls to surrender.


"An organization calling itself the Imad Mughniya Group and proclaiming affiliation to Fatah's Al-Aqsa Brigades claimed responsibility in an email for the shooting."[i]


"An investigation into an overnight Israel Defense Forces operation in the West Bank city of Nablus early Saturday suggests that Israeli soldiers may have executed two of the three Palestinian militants who were killed, the left wing rights group B'Tselem said Saturday.

In the operation, the IDF killed three Al Aqsa Martyrs Brigades operatives, whom officials said were responsible for a shooting attack on Thursday which killed 40-year-old father of seven Meir Hai of the settlement of Shavei Shomron. The troops surrounded the homes of the three and called for them to exit, and killed them when they refused to surrender.

According to B'Tselem, in two of the three cases the troops behaved as if they were preparing for an execution, not an arrest. Relatives and eyewitnesses told B'Tselem that the two were unarmed and did not attempt to flee, and that the soldiers weren't trying to stop them, but rather shot them from close range once their identity was revealed. There were no witnesses to the shooting of the third man".


Palestinian Authority officials, participated in the funeral procession. The masses called for r retaliation for the death of the three..

"This is another heinous crime on the long list of crimes of the occupation," said Fatah's armed wing in a statement, which promised a speedy and painful response.

The exchange of prisoners is not going any where. Israel has refused to free all the political prisoners on Hamas list. In addition Israel wants to exile about 100 of them and refuse to commit itself not to murder them after their relase.

The imperialists and their local servants are terrified of a new regional Intifadas, and while Abu Mazen made it clear that the PA is against a new Intifada, he is losing control over the Palestinian masses in the West Bank. The only question is what will be the match that will ignite a new intifada.

The Israeli state claim that its criminal actions are justified because of its need to defend the Israeli state. However we do not accept the right of self determination of a settler colonialist society that formed an imperialist state. We defend the right of self determination of only oppressed nations like the Palestinians. In our opinion, following Trotsky line on South Africa is a Palestinian workers state from the river to the sea in the frame work of the socialist federation of the Middle East. This state will ensure the right of return for the Palestinian refugees and the safety of the  Jews who will elect to stay and live in a Palestinian workers state.