Down with the World Economic Forum! 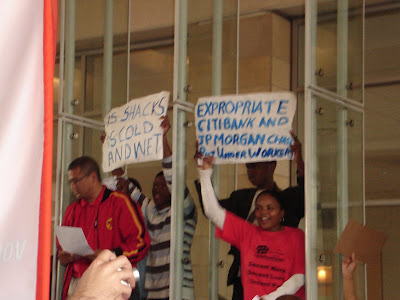 MEMORANDUM OF UNITED STRUGGLES AGAINST STARVATION

THIS DEN OF THIEVES IS STARVING THE WORLD!

Every time we go into a super market, the prices have gone up; yet the world food prices have come down by 40% in recent months.

The food gang like Pick ‘n Pay, Shoprite, Woolworths, Spar, Tiger Brands, Pioneer and others, are making billions from overcharging us. All of these companies are owned by international banks. The profits of these same banks are falling; some of them, like Citibank and Merryll Lynch had to be bailed out with workers’ money in the United States. It is these banks that are deliberately pushing up food prices because, behind the scenes, they have a monopoly on food production and distribution, in the world!

Billions of people are being deliberately starved by these banks that the South African government is welcoming here with open arms. Of particular concern is that the SA government is now acting as the mouthpiece of imperialism by justifying the 34% increase in electricity which is nothing else but a legal scam for the self enrichment of US imperialist banks. The 34% increase is nothing else but putting the burden of the falling profits of the monopoly capitalists on the shoulders of the poor of the world.

Further we are concerned that Citibank and JP Morgan Chase are stealing US$ 6 billion ( About R50 Billion) of GM workers pension funds while retrenching 40 000 workers. We call for the expropriation of the imperialist banks and for them to be placed under workers control. We call on the workers of GM to occupy, resist and control their company. Further:

A group of activists and workers’ organizations met in Cape Town on Monday 1 June 2009 to discuss the crisis facing the working class today, namely that none of the unions or mass workers' organizations are waging a serious fight against starvation and poverty facing the working class. Millions are malnourished, many are dying of hunger and many do not have adequate clothing and shelter.

The first step was to form a new movement called UNITED STRUGGLES AGAINST STARVATION (USAS).

It was decided that the first action was to organise this mass protest at the World Economic Forum on Africa on the 10th June 2009 at the CTICC. The capitalists have the audacity to come here to openly plan their further plunder of Africa. We are calling on the working class to take up a sustained campaign against starvation.

Decent Houses for all! Occupy vacant buildings and land!

Share the work among all who can work, without loss of pay!

No to retrenchments and closures! Sack the bosses! Occupy! Expropriate!

Increase all wages by a minimum of 30%, wages to increase when prices do;

Expropriate all the food producers and distributors, under workers’ control!

Expropriate and centralise all banks, under workers’ control!

Replace all union leadership with representatives who are prepared to fight the capitalists! Call a national council of workers’ delegates and unemployed to co-ordinate the fight

Establish workers’ defence committees against attacks by the state

Capitalism is the crisis, working class power the solution!

All workplaces and working class communities are called on to elect delegates to send them to our meetings. USAS 10.6.09