South Africa: Alexandra residents on the march for houses and jobs for all 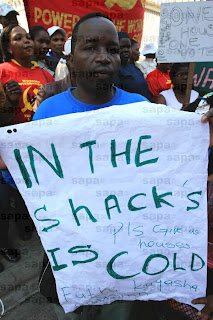 On Wed 13th May 2009 at 830am Alexandra residents will march on the Johannesburg High Court, raising their demand for adequate housing and jobs for all. The march starts at Vogas house (corner Pritchard and Mooi streets). Frustrated by years of empty promises by the government for housing and jobs, many residents occupied the RDP houses in River Park, Alexandra.

The Alexandra Renewal Project, a product of the ANC’s so-called broad based black economic empowerment, has not only failed to provide adequate housing for all in need in Alexandra, they have also been involved in corruption, selling houses to their friends which should have been given for free to backyarders and shackdwellers. The Alexandra Renewal Project is seeking a High court action to evict the residents from the RDP houses in River Park. The Alexandra Residents are on the march to oppose this. While several several community and worker organizations support the march, it is being spearheaded by Vukuzenzele and supported by the Landless People’s Movement.

The residents say that the world capitalist crisis is reflected in South Africa, in part by the government not building enough houses for the people, creating an artificial scarcity in housing so that people’s desperation ensures that the banks and construction monopolies can make super-profits. Thus the fight of the workers in North and South America against retrenchments and against homelessness, in the entire world against high food prices and low wages, against unemployment is part of the same fight locally for housing and jobs for all.

Their fight is part of the same fight of workers locally for a living wage or for an end to retrenchment. The government’s commitment to monopoly capital is reflected by their appointment of billionaire capitalist, Tokyo Sexwale to the housing ministry. Mr Sexwale is the head of Mvelaphanda holdings which has substantial shares in construction giant Group 5. He is but one of several paper empowerment billionaires who are owned hand and foot by Anglo American and JP Morgan Chase. To add insult to injury the government has renamed the housing ministry to be that of ‘human settlement’- this shows that the government has now openly given up on housing the masses and will do their masters’ bidding to resettle the poor in shacks away from the city centres (social control).

The Alexandra residents are calling for Cosatu, Nactu and Fedusa to call urgent extended joint shopsteward council meetings to unite the housing struggles with the fight for a living wage, for lower food prices, for shorter working hours and an end to unemployment.


Forward to houses and jobs for all!

Down with ‘broad-based’ self-enrichment!

Expropriate the banks and construction companies and place them under working class control!

[46 Arrested on MayDay
Frustrated by years of non-delivery and corruption in allocation of the few houses in Alexandra, the shackdwellers and the homeless who live in some of the vacant factories in Marlboro (a section in Alexandra), occupied some flats built by the ANC self-enrichment group, Alexandra Renewal Project. True to form, the police cracked down on the masses, arresting 46 people, today, 1 May 2009. The occupation of the houses symbolises the essence of the birth of Mayday, namely a day of struggle for the demands of the working class on a world scale; this time the right to housing. To date, despite numerous requests by the homeless for the list of who will be able to move into the flats, the Alexandra Renewal Project refuses to release the names. Instead, their instruction was to put the police on the homeless. This summarises the essence of the ANC-SACP -Cosatu popular front: they are talking about worker interests from the platforms of the many Mayday rallies, while in practice are defending the interests of the banks (international capital) by enforcing mass homelessness.
The arrested were being held in the Bramley police station, near to Alexandra but due to the cells being full, they are being transferred to John Vorster square. [John Vorster was one of the most brutal apartheid prime ministers, reknown for his heartless crackdown on the ANC and other then 'liberation' forces]
--
Shaheed Mahomed, Secretary, Workers International Vanguard League
1st Floor, Community House, 41 Salt River rd., Salt River, South Africa 7925
ph 0822020617, fax 0880214476777
workersinternational@gmail.com web www.workersinternational.org.za