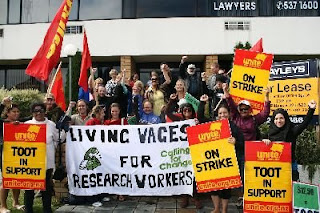 Workers locked out: bosses locked in.

Call centre workers at Synovate in South Auckland were today locked out by their employer. The workers had been negotiating for secure hours and a pay rise of a dollar when they received word by text last night that they would not be allowed to come back to work.

Upon arriving at the call center this morning union members found the front door padlocked shut by the company and a notice telling their non union workers to sneak in by the back door. In response to this attempt to use scab labour Unite Union officials and members added their own locks to the front door and used cars and locks to block all other entrances to the building. This effectively locked the bosses inside for two hours until the union allowed one car to be moved to allow delegates to enter the building to continue the negotiations.
Unite Union Secretary Matt McCarten told assembled workers that he had dressed in a warm coat and had a razor in his pocket so he could shave before court if he was arrested. Most of the workers seemed positive and genuinely angry at their working conditions particularly that their shifts can be cancelled with no notice. Several however talked about how they could not afford to miss work - this is what the company is undoubtedly relying on to break the unions strength on this site.

There has been a picket outside Synovate all day and members of the public are urged to come out to the site: 26 Aviemore Drive, Highland Park, East Auckland. At this stage the lockout is indefinte, more details will be posted here as they come to hand.

Report by Workers Solidarity at :
http://indymedia.org.nz/newswire/display/77087/index.php

In addition to the above: The management offered these workers who are on the minium wage of $12.50 an hour, a 20 cents an hour raise! The same company pays its call centre workers in Australia A$22 per hour. The management called on other workers to replace the locked out workers. After lengthy discussions with these workers most went home or joined in with the picketing locked out workers and supporters. About 6 carloads of police turned up and issued the union officials with trespass notices. After a tense standoff the union unlocked the rear door to allow access. Only 3 of the replacement workers ended up going into work. Not nearly enough to replace the locked out shiftworkers. A good staunch picket that shows that unions can win by taking a strong stand and persuading workers not to scab on their locked out mates. Of course the pickets need to be hundreds strong so that the scab workers have no chance of getting in. But they will only get stronger if unions like Unite! take a militant stand and show the way to do it.